The following core information on the Fiber Optic Guitar is provided below.

George Bowley's first job in industry was as Program Manager of a Fiber Optic Sensor System Research and Development effort in support of a Naval Research Laboratory classified Navy project that used common optical fibers to sense minute changes in pressure. At the time, he wondered if those same optical fibers could replace the strings of a guitar and provide better sound, more sensitivity, and greater protection from electrical hazards.

He tested that theory in the laboratory by stretching a length of fiber on an optical rail; exciting one end with a light-emitting diode and detecting the change of light amplitude as the fiber vibrated with a photo diode at the other end. The results were astounding. The electrical output of the photo diode replicated the tonal vibration of the optical fiber.

Although his primary motivation was focused on developing a fiber optic guitar concept, his thoughts expanded toward applying these same fiber optic sensor principles to all musical instruments. After further research and experimentation, he devised methodologies whereby most all musical instrument sounds could be replicated by either embedding optical fibers themselves in instrument bodies, or by otherwise utilizing fiber optic sensors to detect and transmit their tonal vibrations to remote amplifying devices.

As a result of this vision, George patented the entire concept of applying fiber optic sensor technology to every type of musical instrument.  He defined that concept as follows:

"A fiber optic musical instrument provides a design in which the musical notes and characteristic instrument sounds, normally sensed by electro-mechanical devices such as magnetic pickups and acoustic transducers, are generated by the modulation of light within optical fibers and are transmitted to amplifying devices without the need for externally mounted sensing devices."

For a more in-depth technical discussion of the concepts and applications of fiber optic sensor technology to the design and amplification of various musical instruments, please refer to the actual Patent which is available by going to the U.S. Patent and Trademark Office website search screen at http://patft.uspto.gov/netahtml/PTO/srchnum.htm and entering the Patent Number 4,442,750.

The Fiber Optic Guitar (Below) is the prototype instrument embodiment of the U. S. Patent on Fiber Optic Musical Instruments above.  The prototype guitar “places the Patent into practice". 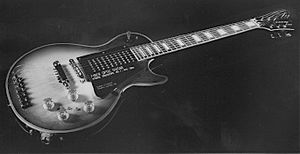 A Fiber Optic Guitar provides an innovation in amplified musical instrument design in which the musical notes and characteristic instrument sounds normally sensed by electromechanical devices such as magnetic pickups and acoustic transducers are now generated by the modulation of light within optical fibers ("strings") and are optically transmitted without losses to distant amplifying devices. Problems associated with conventional electric guitars, such as induced noise and hum pickup, limited frequency response, short cable feeds and electric shock vulnerability, are virtually eliminated.

It is important to note here that the patented fiber optic guitar concept is for a totally optical guitar.  That is, the only input to the guitar is light from a connected optical fiber, and the only output from the guitar is another optical fiber containing a light that has been modulated by each string's vibration.  Thus, the guitar is totally isolated from electrical means.

However, in order to build this initial prototype guitar, it was necessary to mount the light-emitting diodes (or laser diodes) and the photo diodes directly into the body of the guitar for demonstration purposes.  Hence, electrical power had to be connected to this particular model via the external cable and power supply shown in the photographs (on another page). 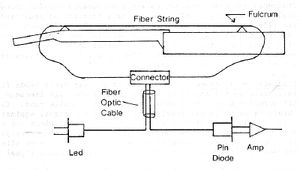 The graphic above illustrates its basic design. Six optical fibers are tensioned across the bridge and nut, represented by the two fulcrum points indicated. The fibers terminate in a specialized optical coupler/connector on each end that then interface with a length of fiber optic cable.

The fiber optic cable serves as the transmission medium for both providing the light input to the fiber strings from a remote optical source, and for sending modulated light back to the remote detection and amplification circuitry.

Optical fiber strings are played in the normal fashion, and behave just like any other nylon or steel string, except they are smoothly coated glass or plastic instead. However, further research has shown that improved techniques may provide a fiber optic string with the exact feel of normal guitar strings. Fiber strings possess equivalent musical qualities such as sustain and tone and, as discussed earlier, offer advantages not possible with conventional guitar strings. They would be available in standard string gauges.

When the fibers are set into vibration, they interact with both the bridge and nut. The bridge is seen by the fiber as a periodically varying disturbance (external pressure) acting upon the fiber which is directly proportional to the frequency of vibration. As explained above, this varying physical disturbance causes a microbend loss that modulates the light in the core. 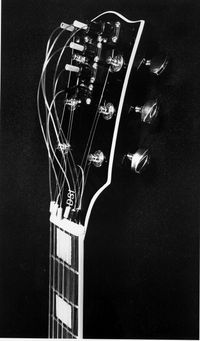 The optical source is generally a Light Emitting Diode (LED) or a laser diode which is currently available and inexpensive. The photodetector converts the intensity-modulated light (incident photons) into a proportional voltage which is then applied to standard amplification circuitry.
The detector used is normally a PIN photodiode, although other photo transistors and Avalanche Photo Diodes (APDs) can also be used depending upon desired design requirements. Fiber optic cable and connectors are state of the art communication components. One important criteria to observe in fiber optic guitar design is to insure that the optical wavelength emitted by the source is matched to the wavelength of the detecting device, and that this wavelength falls within acceptable attenuation parameters of the fiber used.

As a member of the Audio Engineering Society back in the 1980s, George authored a Technical Paper on the Fiber Optic Guitar and presented it at an Audio Engineering Society Convention in New York City later that year. This Paper can be obtained by going to the Society website at http://www.aes.org/e-lib/online/search.cfm and searching for it by title or paper number as indicated below.

"Audio-optics - The Techniques and Applications in the Next Generation Recording Studio",
MIX Magazine, Volume 7, Number 12, December 1983.

"A Little Light Music From Dynamics", The Fairfax Journal, November 2, 1981.